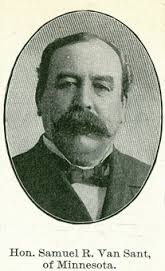 “Samuel R. Van Sant takes office as the state’s 15th governor on January 7, 1901. He began his career as a riverboat builder on the Upper Mississippi. As Minnesota’s fifteenth governor, he led the fight to brake the runaway powers of the railroads.” *

Read an excerpt of what it meant to be a “trustbuster” in his era?

“The second was the establishment of the State Board of Control to take on the railroad monopolies. The old riverboat captain didn’t have much love for his main competition on the iron rails. He particularly detested the Northern Securities Company run by James J. Hill and J.P. Morgan. The jovial riverboat captain turned out to be a very determined trustbuster. Van Sant’s battle soon turned into one of the biggest court dramas to ever come out of Minnesota in this suit to dissolve the Hill-Morgan railroad monopoly. He soon won the backing of President Teddy Roosevelt under the newly passed Sherman Antitrust Act. In 1904 the Supreme Court, by a vote of 5 to 4, upheld the determination that the Northern Securities Company was an illegal restraint of trade and the trust was broken up.” **

Father, thank you that Van Sant fought the monopolist powers of Minnesota in his term. His experience with the Northern Securities Company underscores an achilles heel of free markets; highly successful companies may eventually eliminate the competition in their fields and form monopolies or oligarchies. The most sought after form of land transportation of the North Star state was controlled by just two men; James J. Hill and J. P. Morgan.

You have given us clues in the Bible regarding property rights and ownership. Tribal allotment of specific geographic territories are described in the book of Joshua. All  descendants of the sons of Jacob had land based on birthright. Land could be bought and sold, more like leased, but only for a fixed number of years until the Jubilee.

The Year of Jubilee described in Leviticus 25:8-13 is a year of pardon, for personal sins, debts, release of slaves, and a return of tribal property. So, we currently practice ownership of property, but do not have a system for forgiveness whether personal, labor, or property-based. Some may argue that bankruptcy fulfills this role, but is incomplete when compared to the model of the Pentateuch.

Although the Supreme Court upheld the position of the people regarding the railroad monopolies, we have no universal reset button for society like You describe! How do we enact Your standards in modern society? We hold property, but are not tied to specific geography on the basis of our tribes unless we are Native Minnesotans. We are disconnected from the land, and from each other! Is it because there is so little forgiveness in our modern system based not on wealth, but debt?

That said, Merciful One, do not let us be vain towards the successful, or return shrewdness with the counter-judgment of punishment! Will You forgive Minnesota its bitterness towards Morgan and Hill, and their company? Will You forgive them their “drive to power”? Most cannot relate to the unchecked influence of men like Morgan and Hill, but perhaps they can relate in a smaller way. If we have the power to change everyday situations in our favor, will we use it? Or misuse it?

Father, will You forgive us when we look expectantly and only to our system for justice? We are vapors that dissipate in a day! You are the only unchangeable personality in the universe. You are self-content and not subject to bribery. Your integrity allows us to enter into justice if we are open to self-examination as well as other-examination!