Thank you for Gear, and his commitment to Minnesota. Thank you for the blessing his presence had on early Minnesota and especially Fort Snelling. Thank you for his example to future generations here: we are free to reach across cultural boundaries when motivated by Your love!

It is my belief that we have a limited view of our history. We know in part, and we often project our vantage point onto the characters of the past. Perhaps we need a new lens to view the history of Native Minnesotans and its European settlers? May we equally remembers those that built relational bridges in this meeting of peoples as those who tore them down.

The following excerpt demonstrates where the heart of Priest Gear:

“Ezekiel Gilbert Gear was horn in Middletown, Connecticut, September 13th, 1793. He was ordained deacon by Bishop Griswold in the same church in which he was baptized, and his diaconate was passed in that diocese. He was ordained priest by Bishop Hobart, and was appointed missionary in the western part of New York state. There he labored at Onondaga Hill, Avon, Manlius, Ithaca, Syracuse, Binghamton and Brownsville. He also worked among the Oneida and Onondaga Indians, baptizing, marrying, and admitting many to the communion of the Church. He was present at the confirmation by Bishop Hobart of ninety-seven Indians, presented by Eleazar Williams. We can well imagine that this previous connection with Indian work led him to take an especial interest in advocating, as he did, the beginning of work among the Sioux and Ojibways of Minnesota.” 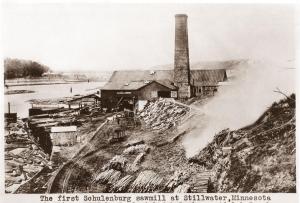 On the east side of the Mississippi, a vast forest of pine and other evergreens stretches to the Canadian border. Many white pine along the St. Croix River are 200 feet tall and five feet in diameter.*

Jesus, thanks for our timber resources in Minnesota. Thank you for all who have, who are at present, or who will work in our forests in the future! Will You send your blessing into every place where Your Minnesota forests have gone: furniture, homes, barns, fences, etc.? Will You bless every recipient of Minnesota wood as You chop the roots of blame, and judgment, grudge and jealousy, envy and anger?

As you said in Romans 11:16b “…if the root is holy; so are the branches.” At present, will You forgive any worship of nature itself, and the lack of acknowledgement of to the Creator of the Woods? I’m guilty Lord too: we love stuff and use people instead of loving people and using stuff! Have mercy!