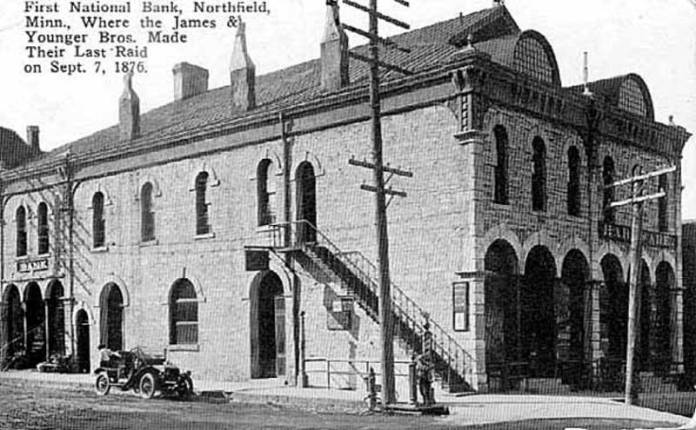 “The notorious Jesse James gang sticks up the First National Bank in Northfield, but leaves town without the money. Three outlaws are killed, three are captured, only Jesse and his brother Frank escape.

Cole Younger, along with his brothers Bob and Jim, had been robbing banks and trains with Frank and Jesse James and other members of the James-Younger Gang since the Civil War. After more than a decade of life as an outlaw, Cole’s exploits were halted by that fateful attempt to rob the First National Bank of Northfield. The Northfield Raid, as the robbery attempt has come to be known, has inspired endless speculation and multiple theories of the sequence of events and who actually participated.” *

Lord, have mercy on those of us who sin by the filling of banks. Lord, have mercy on us who sin by emptying banks. Lord, will You forgive this offense against You, and the myriad of offenses caused by both our love of, or envy of others’ money? Will You set us free today from the bitter roots Minnesotans have towards banks, and those who commit economic crimes? Will You move us to a proper relationship with money? As individual’s, town’s, counties’, states’, and nations’?