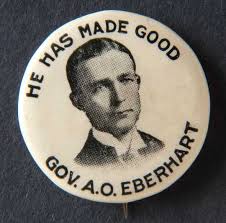 “Adolph Olson Eberhart takes office as the state’s 17th governor upon the death of Governor John A. Johnson. Eberhart was subsequently elected twice on his own merits.” *

It’s a timeless challenge to any society, during any period in human history, to change their leaders and maintain a continuity of authority. When a sibling stands in for mom or dad, they usually aren’t received with the same respect. The same goes for an anonymous lieutenant governor, Eberhart, suddenly thrust into prominence.

Events like these seem to underscore the importance of relationship and authority. We give our allegiance more easily to those whom we know. It seems a logical and reasonable unwritten precept of our survival instincts. We gain trust through consistent and positive relational knowledge of our neighbor.

I thank You that Governor Eberhart was up to the task. I don’t know the details of how he won the populace of Minnesota over, but it is recorded that he did. And he repeated his success twice.** Perhaps it was his consistent work ethic and and stalwart service to his constituents.