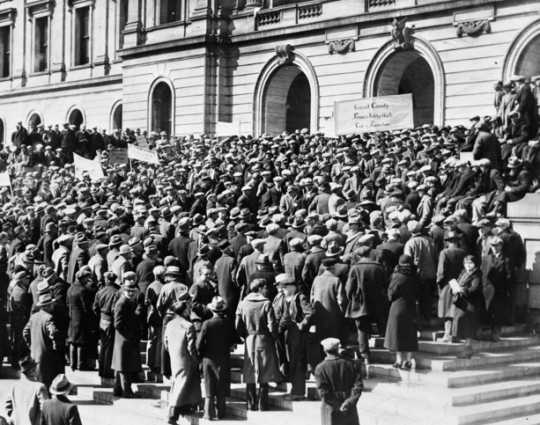 “Protesting farmers bring a starving cow and horse to the steps of the capitol to dramatize the desperate conditions in rural Minnesota. Droughts for the last six years have ruined crops and depleted the land. With little growing, farmers don’t have anything to sell. With so little money in people’s pockets because of the depression, prices are low for whatever farmers can sell. Banks foreclose on many farms; others are simply abandoned. Out of this ferment, a coalition of reformers and radicals formed the Farmer-Labor Party.” *

As a backstory to the political theatre of bringing starving animals to this protest in Saint Paul, we need to understand the dire need and impetus of the groups involved. Below, historian George H. Mayer gives a fine summary of the mindsets of Depression Era Minnesota farmers and workers.

“The farmer approached problems as a proprietor or petty capitalist. Relief to him meant a mitigation of conditions that interfered with successful farming. It involved such things as tax reduction, easier access to credit, and a floor under farm prices. His individualist psychology did not create scruples against government aid, but he welcomed it only as long as it improved agricultural conditions. When official paternalism took the form of public works or the dole, he openly opposed it because assistance on such terms forced him to abandon his chosen profession, to submerge his individuality in the labor crew, and to suffer the humiliation of the bread line. Besides, a public works program required increased revenue, and since the state relied heavily on the property tax, the cost of the program seemed likely to fall primarily on him.

At the opposite end of the seesaw sat the city worker, who sought relief from the hunger, exposure, and disease that followed the wake of unemployment. Dependent on an impersonal industrial machine, he had sloughed off the frontier tradition of individualism for the more serviceable doctrine of cooperation through trade unionism. Unlike the depressed farmer, the unemployed worker often had no property or economic stake to protect. He was largely immune to taxation and had nothing to lose by backing proposals to dilute property rights or redistribute the wealth. Driven by the primitive instinct to survive, the worker demanded financial relief measures from the state.” **

Even with bifurcated interests, rural and urban Minnesotans held this coalition together for about twenty six years. They shared the commonality of urgent and real need, and a common narrative of human effort quashed by the manipulations of external economic or political forces. So what were the fruits of this protest iconized by the farmers’ famished cow and the teamster’s hungry horse?

“Minnesota’s Farmer-Labor Party was the most successful labor party in United States history. Starting in 1918, it was a political federation of labor unions, not just a “labor friendly” political party. The Minnesota Farmer-Labor Association, a grouping of associated unions and farmers, provided the organic connection between labor and the party. Before the party merged with the Democrats in 1944, they had elected three governors, four U.S. Senators, and eight members of the U.S. House of Representatives.” ***

This protest strikes home with me and my father’s experiences in Depression Era rural Minnesota. His father, F.M. Jaracz, lost his farm in Kelliher, MN which drove him to sell moonshine under the cover of his Watkins route. He was busted under the Volstead Act and did eight years of Federal prison. My dad, Le Roy, became a ward of the state and was taken in by F.M.’s moonshine partners; the C.N. Orvis family.

The Orvis family also lost their farm, and were forced to live in a tiny, one-room rental in a local fishing resort called Runkle’s Cabins. They eventually lost that and lived on the dredging barge where Mr. Orvis was lucky enough to land a job. The family of eight did  not have more than two rooms until World War II.

Dad was raised eating oatmeal, biscuits spread w/ lard, and “boiled dinner”. (Think of a catch-all “stone-soup” with a base of potatoes, rutabaga, and any meat shavings available. He wore ill-fitting hand-me-downs from the five boys, and wore shoes with cardboard soles nick-named “Hoover leather”. All the kids worked odd-jobs because their income for the family was indispensable.

So we turn and seek Your wisdom, El Gibbor (G-d of Strength); will You remember us when we gain and lose our vitality? Will You forgive our moments of strength when we arrogantly think we no longer need You? Will You forgive our moments of desperate want when we choose to blame You? We have sinned against You in this era of 1935, and still blame You for bad weather, ruined crops, lay-offs, and hiring freezes; have mercy.

We share the motive-conflicts of these ancestors: we simultaneously want You to shield our successes from You so we can own them, and disburse our failures to You or others so we can disown them. Why do we find it so hard to truly acknowledge our present reality? We are terrified to bring our sacred cows and ignoble steeds to the steps of Your capitol. By Your might, give us the grace to show our hands, especially when are dealt a raw deal.

Will You forgive this era its’ judgments made by farmers towards: the state government, the railroads and middle-men, and the wizards of Wall Street? Will You restore to them what was taken in the Depression? May the growers know Your unmerited favor and “ora et labora” to pass Your wisdom into all future farmers of Minnesota!