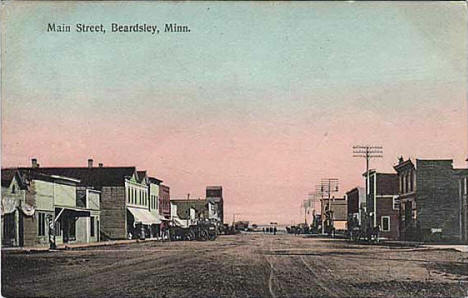 “A temperature of 115 degrees Fahrenheit in Moorhead ties a record set in Beardsley in 1917 for the highest ever recorded in the state.” *

Beardsley, Minnesota is a town of 233 people. It sits in the little “elbow” of Minnesota’s western border in Big Stone county. It’s name came from W.W. Beardsley who homesteaded its first farm and platted it ca. 1880.**

Another little snippet about the history of Big Stone county:

“Scientists declare that men lived on the shores of Big Stone Lake and Lake Traverse nearly twelve thousand years ago. A skeleton, thought by some investigators to be that of one of these people, was exhumed from a gravel pit in Browns Valley Village a few miles north of the Big Stone County line, in 1934. It is known as “The Browns Valley Man”. With the skeletons, were six beautiful flint artifacts of the oldest type that has been classified in America.

Evidences of a more recent prehistoric occupancy of Big Stone County by an Indian-like race are plentiful. Overlooking the lower part of Big Stone Lake, scattered along the Minnesota River below the foot of the lake, and on a prominence near Artichoke Lake, are a number of artificial mounds of earth which have been scientifically surveyed and mapped. Most of these mounds are round and of considerable size and some are flat-topped. Features of the fortified site 60 feet above the river at Odessa are an embankment 722 feet long and 20 feet wide with a height of 1½ to 2 feet, and a diamond-shaped mound varying from 42 to 54 feet in diameter, with a flat top, 20 X 28 feet.”***

Ok G-d, I don’t know a lot about this place other than it’s small, farming-oriented, and contains some ancient history. Oh, and it’s the site of the hottest recorded heat in my home state. Where do You want to lead me in prayer today?

I begin with giving thanks for this small town. You care about each and every place in this universe, and so I commend You for being so watchful over it today. We remember You as the Observant One of All today!

Next, I want to express gratitude for Your creation of weather, and how You masterfully control the climate of the world for the benefit of all creation, and for Your greatest purposes. We do not ponder enough how exactly You limit the range of high temperatures within the fairly narrow bandwidth that we can survive. Thank You, dear Father, that our high temperature record is only 115 degrees Fahrenheit!

However, we can be so fickle as a people because of the yearly swings we endure in our weather. Few places on the earth have a larger average yearly temperature swing. Where else on earth can it feel like 115 degrees in the summer, and down to minus 30 degrees in the winter?**** Forgive our offense to You in cursing the summer heat, and grumbling about the most frigid times in winter.

In sum, we thank You for the extremes of our climate, and for how they shape our character as a people. We are somewhat forced to relent and remember that we can’t control all the variables of our lives, and that is a good realization. We invite Your continued blessings on the weather over Beardsley, Big Stone, and the entire North Star State. Well done! You are the peace when we can’t take the heat! 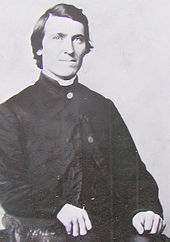 The towns of De Graff and Clontarf in Swift County; Adrian in Nobles County; Avoca, Iona, and Fulda in Murray County; Graceville in Big Stone County; and Minneota and Ghent in Lyon County become the business centers for the bishop’s colonies.” *

Holy Spirit, thanks for Bishop John! Thanks for his help assisting so many to find a new way here in Minnesota! Thank You for friends like Bishop Ireland that keep offering us relief and making a way of exodus where it appears that there is no way. Will You again bless these counties: Swift, Nobles, Murray, Big Stone, Lyon, and Ramsey?

Lord, will You forgive us our bitter ways towards You and each other based on State  and Federal law; legal and illegal immigration? Will You cause Your Church to bless Your image within each other in this effort; Catholic, Protestant, and Orthodox? Our experience helps us see differing needs of those who migrate. Forgive us our favoritism, lawlessness, and placing unnecessary barriers in front of those who seek a safe haven and a bit of Your freedom here. Please forgive us this offense against You and Your Image within our neighbor!

Will You give favor to these Catholic generations of Bishop Ireland, in their homes, the property You allow them to reside, and in the practice of their love for You? We need You! May we see You in all who emigrate their beloved homelands to immigrate to our Land of 10,000 Lakes in good faith! Come Lord Jesus and be our guest in the state of Minnesota!