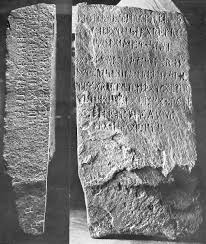 “Olaf Ohman turns up a stone on his farm near Alexandria and sparks a controversy. What appears to be ancient Norse writing on the stone indicates that Viking explorers reached Minnesota in 1362–130 years before Columbus’ voyage. Many scholars dismiss the Kensington Rune Stone as a hoax, but the debate continues into the present.” *

Father, what to make of this Rune Stone controversy? Some analysts have stated that it is an expertly contrived joke or hoax, but others still maintain authenticity. I believe that You are sovereign. It is not beyond You to save a tablet from view in a glacier, and deliver it to Ohman’s field at the right time. It is not beyond You to introduce us to new discoveries that remake the rules of science and history.

Forgive us! We do not know too much, but far too little! Yet our pride blocks our receptivity to a view that challenges our formed perceptions! Lord, You know Ohman’s heart! If he erred on the side of regional or ethnic pride, will You forgive and expose that motivation? If he was an honest man who made an amazing discovery that was distasteful to scholarship and rejected, will You also bring this to light? If he was a master practical joker who went to his grave snickering, will You forgive anyone who was hurt by his hoax? However, will You bless and honor the man’s sense of humor? We need more funny people in this state!

***Evidence that the Rune Stone is a forgery?

****Evidence pointing to the stone’s authenticity?