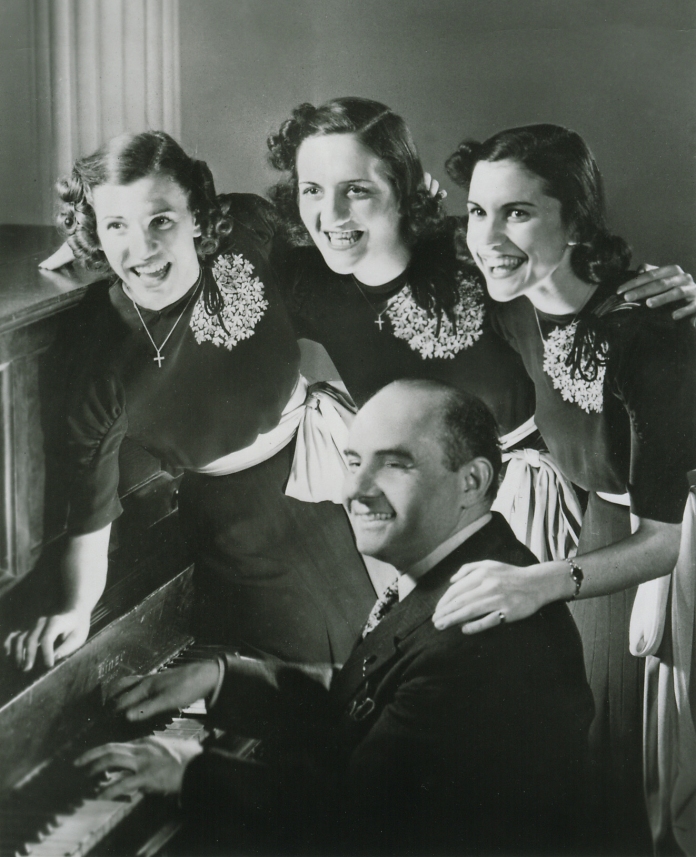 1941
The up-tempo harmonies of the Andrews Sisters (Patti, Maxene, and LaVerne) are some of the biggest hits on wartime juke boxes. The Minneapolis trio will sell 60 million records before LaVerne dies in 1967.*

“There were just three girls in the family. LaVerne had a very low voice. Maxene’s was kind of high, and I was between. It was like God had given us voices to fit our parts.” ** Patty Andrews Weschler 1971

“The Andrews Sisters were an American close harmony singing group of the swing and boogie-woogie eras. The group consisted of three sisters: contralto LaVerne Sophia (July 6, 1911 – May 8, 1967), soprano Maxene Anglyn (January 3, 1916 – October 21, 1995), and mezzo-soprano Patricia Marie “Patty” (February 16, 1918 – January 30, 2013). Throughout their career, the sisters sold over 75 million records (the last official count released by MCA Records in the mid-1970s). After the death of Patty in 2013, the new recount of the group’s total sales was 90 million records sold worldwide, making them the best-selling female group of all time. Their 1941 hit “Boogie Woogie Bugle Boy” can be considered an early example of rhythm and blues or jump blues. Other songs closely associated with the Andrews Sisters include their first major hit, “Bei Mir Bist Du Schön (Means That You’re Grand)” (1937), “Beer Barrel Polka (Roll Out the Barrel)” (1939), “Beat Me Daddy, Eight to the Bar” (1940), “Don’t Sit Under the Apple Tree (With Anyone Else but Me)” (1942), and “Rum and Coca Cola” (1945), which helped introduce American audiences to calypso.” For a more comprehensive listing of their discography, please see link. ***

It is difficult to find closer harmonies than when family members sing together. There are some logical reasons for this: they share the same regional dialect and inflection, they have listened to the same voices to learn how to speak and therefore they share any unique vocal idiosyncrasies, and they have an intimate familiarity with each other personally. Perhaps this last point, knowing each other in a relational context, is the underpinning of a successful music group.

If one thinks of a successful music team over the past 100 years, be it songwriters, performers, or musicians, those that stick together make a long-lasting impact. Why could this be true? Music is a sport of the heart first, and the head second.

At least in much of the history of American pop music, we love those who touch us, not those who execute a series of notes perfectly. We seem to relate best to artists whose perfect imperfections and authenticity convince us of a genuine portrayal of emotion. As a musician and performer with 39 years experience, the author humbly offers this maxim; “If the artist believes in the song, the audience believes in the song”.

Now, we turn to You, and ask to observe this era of the Andrews Sisters with You. We thank You for Your creation called music. If we were born without ears, it would have been sufficient, but You chose to create this pleasure for Your glory and our enjoyment!

Will You indulge my line of thought further, Adonai? Our greatest thinkers and scientists know much about Your universe, though many may not be able to even entertain these meditations. If the universe and the known elements are made of matter, then what is the commonality of all matter?

To my limited knowledge and recollection of science, all matter exists at a frequency. (See MIT video) ***** If this is true, then it would follow that all matter and known elements are a pitch or note value. Granted, this universal keyboard would be much longer than a piano and beyond the perceptions of our ears, but theoretically are tones.

Could this be, at least in part, an explanation of a spoken universe? Did the utterances of Your voice create the frequencies of the elements? Was it literally the note values of Your voice that created the musica universalis; the Music of the Spheres?

All this to say that no one can comprehend, or can make music like You! We love You for so many reasons, but today celebrate Your love of music. Will You guide us further?

We thank You that these familial and regional flavors gave influence to the sound and excitement of the Andrews Sisters! We thank You that their first hit, “Bei Mir Bistu Shein”, helped familiarize our state and nation with Yiddish culture of lyricist Jacob Jacobs and composer Shalom Secunda.****

We thank You for their songs of tenderness that soothed the pains of the Great Depression, the heartaches of World War II, and the jubilance of the Baby Boom! We thank You for their example, though human, that sisters who worked together could create something great! Will You, in turn, bless the present and future musicians, artists, and performers of Minnesota in their artistry and in their families?

Lastly, we give You thanks for their interpretation of the universal language of music! We thank You for the good memories “spoken” to us through their music! We thank You that You ordained our universe of music, and that it helps us better know the universal music of the heart! Amen!
* P.T.H. cites timeline formerly at this URL: mnhs.org/about/dipity_timeline.htm
The Minnesota Historical Society Web site, http://www.mnhs.org, is fantastic! Check it out! Images are from https://images.google.com/?gws_rd=ssl; again, an amazing resource!
** https://ew.com/article/2013/01/30/patty-andrews-dead/
*** https://en.wikipedia.org/wiki/The_Andrews_Sisters
**** https://en.wikipedia.org/wiki/Bei_Mir_Bistu_Shein