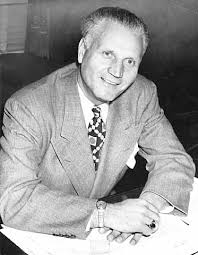 Luther W. Youngdahl, first known for his integrity as a judge, ran to become Minnesota’s governor in an era where inner moral challenges became greater than the external ones. His critics labelled him the “Sunday school governor” for his clear-cut stance against gambling, vice, and moral decline. ** He couldn’t change the hearts of some Minnesotans, but sought to work on enforcing and expanding the laws that protected innocence and virtue.

In the first place, he negated the effects of harmful laws. One year after the legalization of bingo, he was elected governor of Minnesota. During his campaign, Governor Youngdahl had pledged to rid the state of slot machines and, upon taking office, he began to make good on his promise. The number of taxed slot machines dropped from 8,579 in 1946 to 797 in 1950 to two in 1952. ***

Additionally, he created laws of good conscience. Youngdahl advocated for the most vulnerable Minnesotans, and sought ways to relieve the burden of our society on their loved ones. During his first year in office, the American Association on Mental Deficiency (AAMD) held its annual convention in St. Paul, Minnesota. Their concerns were around parental advocacy and the needs and rights of developmentally disabled (retarded) citizens. ****

Just two years later, under the leadership of President Mildred Thompson, the group met in Minneapolis with the objective of creating a national organization. It was her opinion that a cohesive national presence would be the best way to help struggling parents. By 1950, we find Governor Youngdahl a vigorous supporter of their dreams. Please read the following speech carefully, and realize the heart of Youngdahl towards our most vulnerable citizens.

“The point is this, ladies and gentlemen, the retarded child is a human being … And for reasons for which neither he nor his family are responsible, he is retarded. He has the same rights that children everywhere have. He has the same right to happiness, the same right to play, the right to companionship, the right to be respected, the right to develop to the fullest extent within his capacities, and the right to love and affection…
We cannot discriminate against this child, deny to this child the rights other children have because of the one thing that neither he nor his family can help, because he is retarded …
He has a right to these things and his parents have a right to know that he has these rights. For they, too, are entitled to peace of mind about what is happening to a retarded child separated from them.” *****

As can be seen throughout his career, L.W. Youngdahl expressed a clear conscience informed by a great respect for our laws. Even his detractors gave obeisance to his character and wise judgments; he broke up rackets and built institutions for those who were rejected by our community.****** He went on to serve three terms as governor of Minnesota before being called by President Truman to serve as a Federal judge for the District of Columbia.*******

Now we turn in recognition to You as Lawgiver and Judge; Nomothetēs kai Kritēs! ******* We respond to You with the scripture cited by President Abraham Lincoln in his second inaugural address.“The fear of the Lord is clean, enduring for ever: the judgments of the Lord are true and righteous altogether.” Psalms 19:9 KJV We also recognize that the meaning of the word “fear” used here means reverent respect. We agree with the Psalmist that we feel “clean” inside when we practice honoring Your wisdom and living with a clear conscience!

Father of Good Sense, we ask forgiveness for the excesses and spiritual deficits of this era. We were just past the time of surviving the Depression and WWII, and then some of us turned aside to follow the gods of gambling. We looked past You for our sustenance and joy in this era past, and latched onto the rush of a “one-armed bandit”. Will You forgive us this offense of Your ability to provide us with enough? We have thought Your arms are also to short to save us from purposeless existence, boredom, and koinonia. Forgive this dishonor to Your riveting personality, humor, and ever-flowing vitality; You are the life of the party!

Balanced One, we recognize also our failure to protect and recognize those who most need it. We have failed, at times, developmentally disabled citizens of Minnesota, nor properly honored them as citizens of Your country. Furthermore, we have ostracized those who battle with: mental illness, mental disorders, depression, derangement, neurosis, neurotic disorders, nervous breakdowns, schizophrenia, dissociative identity disorder, and dementia. Will You forgive us where we have devalued these neighbors whom You have honored with life and worthiness? Will you bring Your Healing Presence into our broken minds, our disrupted physiologies, and our traumas of spirit?

We acknowledge the shortcomings of Governor Youngdahl to You; in his humanity he is no better or worse than us. However, this day we commend a few of his victories for our state to You. He shielded many innocents from beginning a life of gaming by curtailing the use of slot machines. He added momentum to the AADM, and encouraged the parents and individuals with developmental disorders. He made a place for those displaced by our society because of mental illness. Will You give favor to those who continue his heritage of leadership on these issues?

It’s fitting that Youngdahl was a judge both before and after his political career. He made a lifelong habit of life-giving judgements, and made the way better for those whom society condemned. May we forever take the baton of wisdom passed down through examples like his, and run our leg of the race! May we run until Your mercy overcomes our injustice!

“Therefore let us stop passing judgment on one another. Instead, make up your mind not to put any stumbling block or obstacle in the way of a brother or sister.” Romans 14:13 NIV *********

* P.T.H. cites timeline formerly at this URL: mnhs.org/about/dipity_timeline.htm
The Minnesota Historical Society Web site, http://www.mnhs.org, is fantastic! Check it out! Images are from https://images.google.com/?gws_rd=ssl; again, an amazing resource!
** http://collections.mnhs.org/governors/index.php/10004221
*** Vitt, Michael J. (1993). “Wagering the Future: Gambling and the Law in Minnesota”. The Bench & Bar of Minnesota. May/June. Pg.6 cited in