April 1907
A heated sibling rivalry develops between the Twin Cities’ two pro baseball teams, the Saints and Millers. Streetcar doubleheaders are scheduled on Decoration Day, July 4, and Labor Day, with a game in each city.*

A bit of background is in order to help those who may not know much about the Twin Cities. There is definitely much in common between these two places, but it’s the distinctions that give each it’s flavor. They may not be thought of as ‘strong’ flavors by those who consider Minnesota ‘flyover country’, but that is a matter of taste.

St. Paul is the older brother of Minneapolis. According to local legend, first two structures in St. Paul were a log trading post that doubled as a pub, and a log Catholic church. There are very strong communities derived from nations with a Roman Catholic heritage: Irish, French, Polish, Italian, and Mexican. This city leans blue-collar, tends to move slower, and with more respect for tradition.

Minneapolis is the kid brother that just kept growing. It historically has been more Protestant, with residents mostly from Western and Northern European descent. It leans more white collar and entrepreneurial, with more nightlife to spend new money.

Holy Umpire, thanks for the heritage of baseball in Minnesota! What an awesome combination of sport with times for team play, and individual achievement! Baseball truly is a mirror of the best attributes of our culture.
Unfortunately, Saints and Millers reflect the darker sides of our nature too. Sometimes we, as fans attempted to “help” our home team. Check out this example of ‘sportsmanship from 100 years ago; 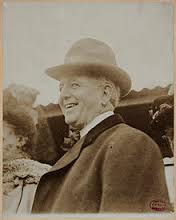 “The newspapers joined the struggle, firing their artillery at enemy camps across the Mississippi River. In the 1890s, when both cities were represented in the Western League, the Minneapolis Tribune leveled a charge of “dirty ball” against its neighbors to the east, the Saints, who were owned and managed at that time by Charles Comiskey. “Manager Comiskey,” reported the Tribune, “will be served with a formal notice that the Minneapolis club will not play today’s game unless guaranteed that there will be no spiking of Minneapolis players, no interference on the part of the crowd, no throwing of rocks, no throwing of dust and dirt in the eyes of the Minneapolis players, and a few other tricks which the game yesterday was featurized by.” “ Thornley, Stew. On to Nicollet: The Glory and Fame of the Minneapolis Millers.**,***

God, thanks that You gave a home team to enjoy and be proud of. Will You forgive us for when we have gone overboard and over identify ourselves with a baseball team? Will You forgive harsh words that were sowed then between Minneapolis and St. Paul that still smart today?

Today I want to acknowledge specific sports offenses to You. We have loved winning more than losing, but doesn’t losing build character? We have loved showboat personalities more than the team at times, but innately we know that a single player can’t win the game. We can behave like spoiled brats at games, then lecture our kids about the importance of sportsmanship. God help our ERA and our era! Have mercy on our inconsistent batting average with beloved rivals of yesterday, today, and tomorrow. Thanks that these hostilities birthed a solution; the Minnesota Twins! Will You help us find creative ways to find common ground with our rivals today?

*P.T.H. cites timeline formerly at this URL: mnhs.org/about/dipity_timeline.htm
The Minnesota Historical Society Web site, http://www.mnhs.org, is fantastic! Check it out! Images are from https://images.google.com/?gws_rd=ssl; again, an amazing resource!

**Peruse this wonderful link to the complete article by Stew Thornley. http://www.stewthornley.net/millers_paydays.html

***Dig into a book on the Saint Paul Saints, again, by Stew Thornley. http://www.mnhs.org/mnhspress/books/st-paul-saints