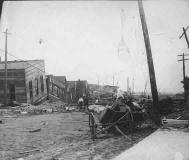 The following copy is directly from a local newspaper the day after the storm.

Brave Nurse Loses Her Life Attempting to Save Patient

TYLER, Minn., Aug. 22.—-Between thirty and thirty-five persons were killed and more than 100 were injured by the tornado which struck Tyler about 10 o’clock last night and tore the town to pieces in a twinkling. Twenty-seven bodies have been identified.

The tornado tore through the heart of the town, sparing only one building, a motion picture theatre, in which 200 persons were sheltered. The greatest loss of life was in a restaurant. Eighteen persons’ were in the place when the brick walls collapsed. Sixteen were killed, and the other two were seriously injured.

Persons engaged in rescue work said that 125 injured victims was a conservative estimate. In addition to the business places, forty residences, the hospital, electric light plant and other buildings were destroyed. The storm raged until 11:25 P.M. and dozens of victims were pinned under debris for two or three hours, before rescued.

The tornado roared into the city from the east. Roofs were ripped from stores and houses, crashing glass whistled through the streets and falling walls re-echoed to thunder crashes before many residents realized what happened.

Destruction of the electric plant with the first shock of the storm plunged the city into darkness. It was not until early this morning that citizens were able to notify adjoining towns of the devastation.

Three of five patients in the Tyler hospital were killed when the building was destroyed. Miss Rose Nelson, head nurse, made an effort to save one of the patients and lost her life. There were eight persons in the building; only two escaped injury.

Home guardsmen from Pipestone arrived here this morning and assisted in the rescue work. Many of the injured were removed to hospitals in neighboring cities. Physicians said they feared a number of the victims would not survive.

Reports that the tornado destroyed the Northwestern Station and a passenger train later proved untrue. The storm, however, wrecked the roundhouse nearby.

It was estimated the property loss would be one million dollars at least.

Tyler is a town of 1100 inhabitants in the southwestern part of Minnesota.

This story reminds me of the era of the prophet Nahum, and the kindness and sternness of G-d in the captivity of the Northern Kingdom of Israel ca. (722-721BC) Those that oppose His people in separation and tyranny will ultimately fall. He alone is Sovereign.

Lord, we may fail to see Your purposes in such a devastating storm, but we acknowledge that You alone are Sovereign and Just. Will You forgive those of our State who judged You for this tornado? Will You forgive our present imbalanced judgements of You? We think of You as loving and miss Your justice, or we think of You as just and miss Your kindness. May we turn to You first in times of great natural disaster. May we trust that You are for us, and not against us. Amen.