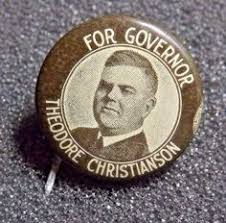 Sorry Lord! Christianson is another Minnesota Governor that I have no recollection of, but I come prepared with a brief backstory below.

“Theodore Christianson, the twenty-first governor of Minnesota, was born in Lac Qui Parle Township, Minnesota on September 12, 1885. His education was attained at the University of Minnesota, where he earned an undergraduate degree in 1906 and a law degree in 1909. After establishing a successful legal practice in Dawson, Christianson became the owner and publisher of the Dawson Sentinel. He entered politics in 1915, serving as a member of the Minnesota House of Representatives, a position he held ten years. He next secured the Republican gubernatorial nomination, and was elected governor by a popular vote in November 1924. He was reelected to a second term in 1926, and to a third term in 1928. During his tenure, a crime commission was formed, as well as a commission of administration and finance. Also, state expenditures were reduced; taxes were controlled; and state government was restructured. After completing his term, Christianson left office on January 6, 1931. He continued to stay politically active, serving as a member of the U.S. House of Representatives, a position he held from 1933 to 1937. Governor Theodore Christianson passed away on December 9, 1948, and was buried in the Sunset Memorial Cemetery in Minneapolis, Minnesota.**

Governor Christianson, a.k.a. “Tightwad Ted”,  was a very fiscally conservative Republican who limited the power of government in favor of the individual. In this era, there were many fears about the insider capitalism of Wall Street, and the destabilizing reactions of sabre rattling socialists. He gave mostly agrarian Minnesotans a chance to regroup and recoup after the personal and property losses of WWI. (Those who lost sons to the war also lost heirs to their farms, as well as their most capable and loyal farm hands.)

So, here we give You thanks for “Tightwad Ted”. We thank You for his accountability and respect for the resources of Minnesotans. Theres a ‘time to scatter and a time to gather’ and we pause to remember Governor Christianson as a man who gave respite and a return to normalcy and simplicity to his constituents. Will You bless his heirs, both familial and governmental, who accept that there is season that the most reasonable course forward is to tighten the belt?

In this, we give You honor for taking us through seasons scarcity and plenty. We thank You for the eternal promise to be our Jehovah Jireh. We ask Your forgiveness where we have forgotten You; either through the sins of easy living, or sins of destitution. Have mercy on Minnesotans’ past, present, and future failure to give You and our neighbors the free gift of gratitude. Amen.

Keep deception and lies far from me, Give me neither poverty nor riches; Feed me with the food that is my portion, That I not be full and deny You and say, “Who is the LORD?” Or that I not be in want and steal, And profane the name of my God. Proverbs 30:8,9 NASB

PS. Will You continue to forgive the cycle of judgment & counter-judgment between the parties and political groups of this age? Perhaps the Republicans forgot Your principles of community because it came through a Socialist  or DFL messenger? Maybe the Socialists and Democrats failed Republicans and Your urgings to personal responsibility through lumping them in with Wall Street, and assumptions that they were against Main Street? Will You forgive all the judgments and counter-judgments of these parties committed then as well as their fruits poisoning the present? Will You make us a State of “tightwads” with our disparaging thoughts, words, and hearts against our neighbor?