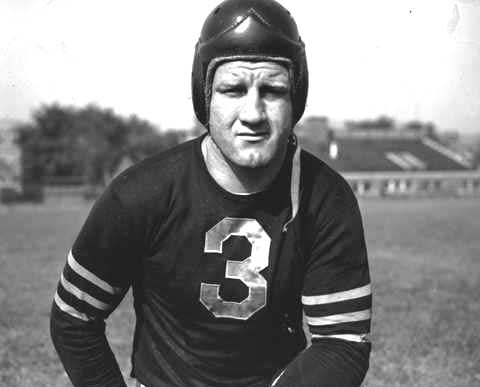 “Gopher football legend Bronislaw “Bronko” Nagurski is named All-American at tackle and fullback, the only player ever chosen at two positions. Later a star with the Chicago Bears, Nagurski signs a contract for $5,000 and pockets another $50 for endorsing Wheaties cereal. After retiring in the 1940s, he will buy and run a gas station in International Falls.” *

“Sports Illustrated named Nagurski one of the four greatest athletes in Minnesota state history (the other three were Dave Winfield, Kevin McHale, and Joe Mauer).” ***

What is it about tough guys that impress us so much, Father? More exactly, how do tough guys, like Bronko, reflect the image of their Creator? In the present era of kinder, gentler, and more sensitive maleness this could foster a normalcy bias crisis; how can a macho man give pleasure to a just G-d?

I think of the unnamed wife of Manoah that was addressed by the angel of the Lord;

“You will become pregnant and have a son whose head is never to be touched by a razor because the boy is to be a Nazirite, dedicated to God from the womb. He will take the lead in delivering Israel from the hands of the Philistines.” **** Judges 13:5

Granted, Nagurski wasn’t fighting for the survival of his people like Samson, but he was given the gift of his physicality and strength. That alone is not enough to create a champion. Bronko clearly battled his opponents on the gridiron with the unstoppable heart of a champion; a spirit that would not give up!

So, this day we give You thanks for life of Bronko Nagurski! We thank You for the strength of his body, and of his mind. We see the unfailing love of G-d better through this image!

We thank You for the amount of work he did as a teen: delivering groceries, plowing, working the sawmill, and laboring at the timber camps. We thank You for this part of his life too, and that he chose to help out his folks and do a man’s work because he could. We see Your rewards for being faithful in small things that lead to bigger things.

We thank You that he chose to become a Minnesota Gopher. He added an unforgettable gravity to a team already good. His work ethic pushed his teammates to give 110% effort resulting in championships. We give You thanks for the way he contributed to bettering the University of Minnesota: in acclaim, in momentary greatness, and in ticket sales.

What I learn today sitting with You thinking on this; You love when we discover who we are, accept it, and live out our potential. Bronko was a tough kid from a no-nonsense place up north. He was accustomed to high alert, dangerous, and very physically demanding jobs.

Perhaps, this same work ethic is what made him a champion on the field? He give You thanks for Your work ethic on display through the life and career of Bronislau Nagurski. May we receive from You the same embrace of our gifts, a resolute spirit, and some holy toughness to power over, under, or through the challenges in front of us? Help us move the ball down field!

“He paws in the valley, and rejoices in his strength;

He goes out to meet the weapons.

He laughs at fear and is not dismayed;