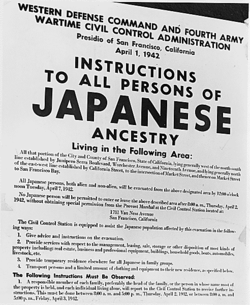 Nov 1, 1941 to 1946
The Military Intelligence Service Language School comes to Savage. The school trains Nisei (children of Japanese immigrants) for intelligence and translation work with the Pacific forces. By the time it closes in 1946, more than 6,000 students will have graduated.

The school had been established in 1941 in San Francisco but moved east when Japanese-Americans were forcibly relocated outside of California. Minnesota was chosen as the new site partly because the army “pinpointed Minnesota as the geographic area with the best record of racial amity.” Graduates of the program translated documents intercepted at the front, monitored Japanese radio broadcasts, and interrogated captured enemy soldiers.*

To give more context, after the United States went to war with Japan, as a means of curbing spying and sabotage, President Roosevelt issued the infamous Executive Order 9066 which removed Japanese-Americans from their homes to concentration camps. Categories were made to sort these people based on risk-factors.** For example, “Kibei” were those who grew up in U.S., but for mostly cultural and linguistic reasons were sent back to Japan to receive their university education. The “Nisei”, or second generation Japanese-Americans who raised here were not trusted by the public.***

One wonders how this group reacted to the indignities and real losses of property at the hands of our government. Below is an excerpt from the Minnesota Historical Society based on witnesses and primary source evidence.
“The Nisei who attended the school faced unique personal challenges when deciding to join the military. Many parents of Nisei felt uncomfortable with their children’s participation in the war. After being discriminated against by the federal government, some Japanese Americans found the idea of military service problematic. The US intelligence service feared that after Executive Order 9066, recruits would be hard to find. However, Nisei volunteered in the hundreds, and those who enlisted did so to prove their loyalty to the United States.” ****

This loyalty expressed by the Nisei changed the results of World War II. Although their stories were mostly unknown until decades later, these volunteer linguists did a tremendous service to our state and nation. “The Nisei linguists were credited with shortening the war in the East by two years, saving nearly a million lives and billions of dollars.” ****

What say You, Prince of Peace? Will You bring insight into this page of our history? We are grateful for Your loyalty to each of us. “Know that the LORD your G-d is G-d, the faithful G-d who keeps his gracious covenant loyalty for a thousand generations with those who love him and keep his commands.” CSB Deuteronomy 7:9

We begin by walking thankfully through Your front door. We praise You for your masterful and chess-like precision in positioning us to do Your will. We are grateful for the receptivity of Governor Stassen to bring this school to Minnesota. We remember and are grateful for the gracious spirit You have put into Minnesotans towards their fellow Japanese-Americans. We still benefit from their wise, benevolent, and forbearing heart towards outsiders. Will You continue this attitude in us today, and enable us to be a harbor for the displaced?

Conversely, we recognize the judgments of our Federal government and some of the public. We, as a people, took actions to dehumanize the Nisei and the Kibei. We literally and figuratively committed acts of institutional racism. We tolerated our neighbors being stripped of their unalienable rights, dignity, and property because of fear in the time of war. Will You have mercy on this judgment of Your people; the Japanese-American?

We remember to You the successes and failures of President Roosevelt in this era. Granted, his leadership helped us ultimately gain victory over our enemies, but his legacy is a mixture of both good and rotten fruit. As a candidate, he ran on peace, but reversed his position and declared war. “I am asking the American people to support a continuance of this type of affirmative, realistic fight for peace.” ****** FDR at Madison Square Garden, NYC October 28, 1940 In the the run up to W.W. II, his policies shifted between pacifying the threats of Hitler and Stalin, and enraging Japanese leadership through blocking their sea lanes and ability to trade. ****** These actions seem contradictory to his public persona, and call the sincerity of his motives into question. Ironically, the man who, arguably, did the most for the American common man also committed the most racist act on the American common man in the 20th century with Executive Order 9066?!

Today we give You thanks for the thousands of Japanese-Americans who rose above the prejudice of our government! We thank You that they did not take the bait of offense straight from the only truly common enemy of humankind; Lucifer. We thank You that they saw the greater threat to humanity in the aggressive prejudices of Tojo. Will You bless their figurative and literal ancestors to also de-escalate war and solidify peace and good-will through knowing language and culture? Amen!