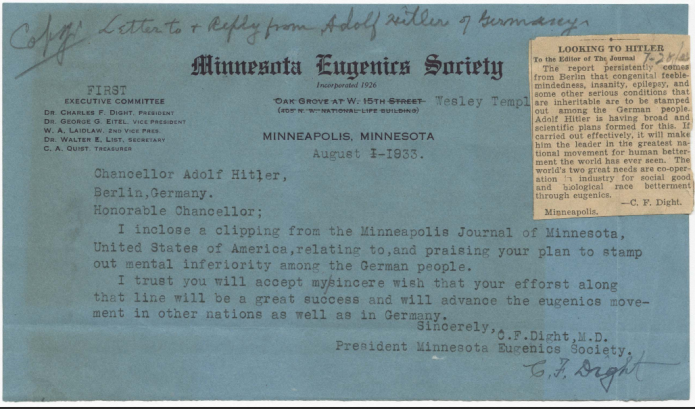 “In the early 1920s, Charles Fremont Dight, a physician in Minneapolis, launched a crusade to bring the eugenics movement to Minnesota. He combined the moral philosophy of eugenics with socialism and espoused that the state should administer reproduction of mentally handicapped individuals. His main lines of approach included eugenics education, changes in marriage laws, and the segregation and sterilization of what he called “defective” individuals. Dight organized the Minnesota Eugenics Society in 1923 and began campaigning for a sterilization law.” *

England was the birthplace of eugenics, and Charles Darwin’s cousin, Francis Galton, the movement’s father. The term became the name of a progressive project of improving the human species by controlling genetic selection. He aimed to apply the creed of “survival of the fittest” to the human race. Think of it, perhaps, as an attempt to create human thoroughbreds.

American progressives founded or led many organizations like Dight’s during this era: Eugenics Record Office, National Conference on Race Betterment, the American Breeders Association, New York Zoological Society, and the Human Betterment Foundation. Leaders of the movement included: Harry Laughlin, Charles Davenport, Leon Whitney, Madison Grant, Paul Popenoe, Eugene Gosney, Margaret Sanger,  and progressive philanthropist Clarence Gamble. As a brief example of the severity of this movement were Mr. Laughlin’s call for mass sterilization of 10% of the population of the US.**

Lord, in Your mercy, hear our prayer. We recognize that Dr. Dight sought to improve our state through advocating for eugenics. We recognize that he sought the betterment of his fellow Minnesotan through work in medicine, socialist politics, and as an educator at Hamline and the University of Minnesota. We give You thanks for his heart to bless others, and minimize disease and suffering.

That said, we recognize the limitations, firstly, of any political system to bring lasting change to our State. Humanistic politics cannot touch the heart and spirit of human beings, but it can mostly control external behaviors. Will You forgive our faith in the progressivism of this era instead of You? Will You forgive the idea that behavior modification does not necessitate a change of heart? Will You forgive our misbelief that compliance equals agreement, but taken to its extremes is an agent that fractures human souls and spirits?

Next, we have simultaneously believed in the goodness of the rule of man and have stood in opposition to the rule of man in our espousal of socialism.  We negated the wisdom of Madison, Adams, and Jefferson that our rights are unalienable. That means that a human being has no power to alienate, dispose of by surrender, barter, or gift the rights given by the Ancient of Days.**** Will You forgive the sins of dualism during this era with our attempts to hold two contradictory beliefs simultaneously? More importantly, will You forgive this affront to Your parental rights and value of every human being?

As a citizen of Minnesota, and a child of G-d, I disavow the judgmental, cursing misbeliefs of Dight. I disavow his national socialist (Nazi) medicine empathies that science can create a “master race” through eugenics, and that such control would be beneficial. I disavow Dight’s letter to Hitler praising his efforts to “stamp out mental inferiority”.*** Will You take the sins within these root untruths that have cursed our State for nearly 100 years up, out, and onto the Cross of Christ? Will You bless genetic research that comports with Your values system?

Will You forgive our attempts to impeach You as the Sovereign of our civil, legal, and political authority of our society?Will You forgive our contemptuous dismissal of that which You have created as perfectly imperfect? Will You help us recognize that all genes, even broken, diseased, or “politically undesirable” ones have a purpose and worth in Your culture? Will You give us wisdom and humility as scientists as we attempt to genetically modify Your creation? Bless us in Minnesota to see that, perhaps, every gene bears Your fingerprints and is, therefore a bearer of “unalienable rights” and priceless worth?

*** Read more on Dight and the ties between Progressivism, Socialism, and Fascism in this movement. https://en.wikipedia.org/wiki/Charles_Fremont_Dight