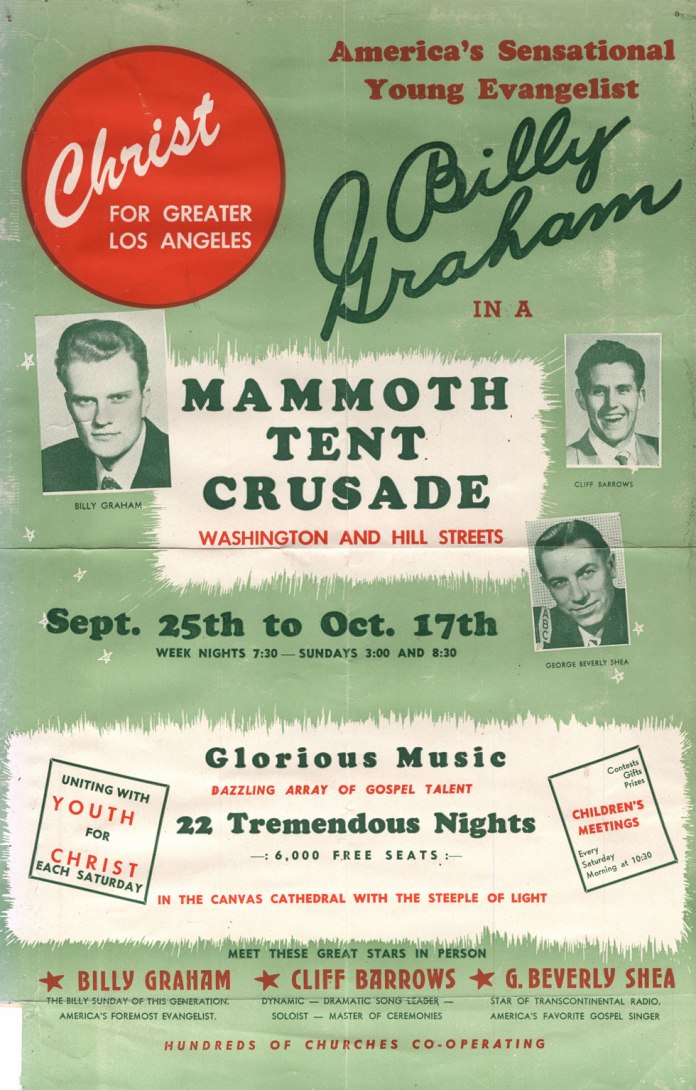 1949-1950
Evangelist Billy Graham founds the BGEA or Billy Graham Evangelical Association in Minneapolis, Minnesota to establish a radio ministry. Over the course of his life, the organization would use all current advancements in media, along with crusades (mass-meetings) to preach the Gospel of Jesus Christ to approximately 215 million people in 185 nations worldwide.

“At the mid-point of the 20th century, evangelist Billy Graham was just months removed from the 1949 Greater Los Angeles Crusade that launched his fledgling ministry into national prominence. As a result of this sudden exposure, Graham was approached about beginning a nationwide Christian radio program. Though he dismissed the notion at first, he eventually agreed, if $25,000 could be raised in one night to begin the process of buying air time. That night in Portland, Ore., the funds—an exceedingly large amount of money at the time—did come in, and the radio program “Hour of Decision” was born.
In order to handle the unexpected influx of financial support for the ministry, Graham called George Wilson, his business manager at Northwestern Schools in Minneapolis, MN., and Wilson immediately filed the paperwork to launch a non-profit organization. Thus, in 1950, BGEA was formed for the purposes of broadcasting the Gospel of Jesus Christ.” *

Perhaps no person in recent memory did more to redefine their faith or world-view as Billy Graham. His laser-like focus, his raison d’être, was to convey the Gospel of Jesus Christ; nothing more and nothing less. To call others to Christ, one must first ask, “Just what is the Gospel?”

Graham’s clear answer to this question was rooted in the words of Jesus.
“For G-d so loved the world that he gave his one and only Son, that whoever believes in him shall not perish but have eternal life.” John 3:16 NIV ** He amplified it’s meaning to him in the following quote:
“This is the one Scripture that I always preach on in a crusade, usually on the opening night. I suppose it is the most familiar passage in the Bible. It has only twenty-five words in the English translation of it, but it is the Gospel in a nutshell. Someone has called it a miniature Bible. The word “whosoever” in this verse means the whole world. Whatever the color of a person’s skin, whatever language he speaks, God loves him and God is willing to save him. To me that is marvelous. It also says that life doesn’t begin when you die, it begins here and now.” ***

Graham’s Gospel reminded the Church of its’ most important commonalities, and steered clear of areas of contention. It introduced to those outside his faith a Father that loved them, liked them, and wanted them. Below are some of the most universal themes of his preaching. Apart from changes in illustrations, he rarely deviated from these simple points.
We can believe in the Gospel because it was written in the Bible by those that witnessed it’s events.
Christ died for our sins on the Cross, and rose from the dead.
It is not a religion, but a relationship. It is G-d reaching out to humanity.
It’s free.
It’s for everyone.
It works. It heals all kinds of separation; internal and external.
It happened once for all time.
Christ is risen. Therefore, He is unique.
He has taken the issue of sin off the table forever so we can focus on real relationship with Him and our neighbor instead of guilt. We can do good works from a good heart.
We can receive it. ****

Maybe it was his commonality and clarity that gave him an audience and built trust with leadership figures the world over? For example, Mr. Graham met and offered his support to every United States President from Truman to Trump. ***** Queen Elizabeth, apparently, was comfortable enough with Billy to let him see her in her Wellingtons, scarf, and old raincoat. ****** Famed boxer Mohamed Ali agreed to meet with Graham and was stunned to find out that he drove an Oldsmobile. That said, Ali also remarked, “when we approached his home, I thought he would live on a thousand-acre farm, and we drove up to this house made of logs. No mansion with crystal chandeliers and gold carpets, it was the kind of a house a man of God would live in. I look up to him.” *******

So we remember Billy Graham today with You, Lord, and the beginning of the BGEA. Is there any wisdom You want to share through the recollection of his life and the Hour of Decision radio show? What did You think about the collaborative events, crusades, and tent meetings he led? How did You feel about his use of radio and media, or meeting with celebrities? As the Speaker of the Gospel, was he a messenger of gladness and announcer of good news?

Beginning with honor, we remember that You are the Author of all good news! You are the champion over every human frailty, rebellion, and separation. You sent Your Son to announce to the world, “Forgiveness and fealty of the King of the Universe to all who believe!”

Can we thank You that this impactful ministry was brought to Northwestern College, George Wilson, and the state of Minnesota in spite of the doubt Graham felt that such a colossal sum ($25,000) could be gathered in one night? We adore You for turning our radio on, and perfectly, strategically positioning the Hour of Decision at the heart of North America? (Could this happen here without the radio pioneering work of University of Minnesota professors Franklin Springer and Cyril M. Jansky Jr.?) Yet, You chose Minneapolis to be a place that broadcasts Your happy news!

Next we consider Billy’s open heart to Your methods, and allowing You to stretch him and build his faith to do what seemed so impossible. Let’s recall a list of ways You grew the impact of Your Kingdom through the BGEA: stadiums full of singing, wisdom taught, and repentance caught. You built an era of collaboration, perhaps, never before possible in the fragmented atmosphere of Christendom that spanned the fears, misbeliefs, and vanity of our denominations. Each crusade being the results of weeks and months of planning, meeting, prayer, and calling out local churches to serve…together!

We appreciate that the BGEA was an organization open to change, and receptive to technology. They did not see advancements in science as a barrier to the Gospel, but as critical allies. We see the growth of this team engaging the worlds of: radio, television, satellites, music and film producing, publishing, and internet media. Yet, through all these channels of communication, the primacy of the human being needing hope, peace, rest, courage, grace, and truth held firm. The gospel must be for people because G-d is for people!

In this, the evangelist set wise limitations to protect his purity and integrity. He met with every kind of person, but maintained his boundaries. Allegedly, he never entered a hotel room first because he didn’t want to be the victim of “gotcha photography” of gossip magazines. He submitted to an accountability group of trusted men who would ask him a list of pointed questions, and the final question was “Have you lied to us in any of your responses today?”

Lord, we see a man and an organization that lived what it believed. We are thankful for their example to their generation, and the impact it had on the present. We are thankful that Your Message brings independence and interdependence, yet frees us from co-dependence!

We also remember the opposition, past and present, to the evangelist and the way the Holy Spirit spoke through him to his generation. We have judged at times, as a Church and society, those who dare bring up the word sin. Yet sin simply means ‘separation’, and we are all disconnected inside and in our relationships in some way. We have taken offense that You dare to claim to be “the Way, the Truth, and the Life.” (John 14:6) We have, too often, chosen to hate the message of the evangelist; “You are free. Someone paid your bail. The door is unlocked, but you have to walk out of that jail cell.”

Again, will You forgive the bitter judgements against the evangelical church that Graham symbolizes by the other branches of Your family? We have been shamed by our own faith culture into compliance. Our culture combined with our own misbeliefs, (whether of religious, atheist, or agnostic origins), has largely silenced the voice of most evangelicals.

We perceive that we are a displaced and unwanted people group in Minneapolis. Will You speak the truth in love to us, Sweet Spirit? Will You remind us that there is a place for the timid and the weak in Your family? Will You remind us again how precious the blood of Jesus is, or that those of us with good looking problems are no better than those with obvious ones? Will You forgive our perfectionistic tendencies that block Your Lordship over our lives? Replace the “try harder” gospel ingrained in many of us with the “try humbler” gospel?

Yet, somehow, Billy Graham is just an ordinary member of Your society. As You forgive us, will You replace our curses with blessings? Will You overcome our distractions with a future of focus? Will You heal us from our isolation, and bring us into community? Will You give us calm, assertive energy and fresh purpose? May we forever do good works out of a clean heart in Minnesota! We all know something of the love of G-d, only open us to share the You we know!

P.S. I had to tack this song onto this post! Can you hear the optimism from 120 years ago? It sounds best on any old, dusty, out-of-tune church piano. C’mon all you underdogs like me! We all have a story! Tell your story!