Lord, thank you for establishing a post office here! Communication is a gift and blessing on us and our state! May You provide more inspiration to improve and enhance our technology of communication in the future. May You give us hearts of reconciliation that strengthen the communication of our state by Jesus’ authority! 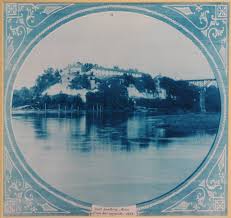 In 1819, the 5th Regiment of Infantry arrived at the junction of the Mississippi and Minnesota Rivers to build the northwest link in this chain of forts and agencies. Here, where traffic could be controlled on two major rivers, Fort Snelling was completed in 1825.*

Lord, thank You for the establishment of order. Ft. Snelling was established to maintain order of our government. Thank You for the Fort’s benefits of regulating trade on the rivers, but forgive any offenses of overstepping its Constitutional bounds. May any injustices starting with the Fort be ended now by Jesus authority. Amen.

Abigail Snelling starts a Sunday School at Ft. Snelling for the children.*

Lord, thanks that You love children. Thanks for the curiosity of the children of Minnesota. May we not fail to teach them the Bible, or introduce Jesus as ‘the Living Word’ of God. Thank you for the legacy of freedom we have in Minnesota because of Jesus!!!

Is this an over statement? Do we have an inheritance of liberty if the culture of our state has chosen to follow the example of Christ? I think it would be a great study for the scholars.

What happens to a culture that cherishes the primary teachings of Christ? Would they not highly value the virtue of love? Imagine a place committed to overlooking offenses, and forgiving its enemies! What if children believed that they were made in the image of a good God that treasured them?

What new vistas would we reach if we remained humble and teachable as Christ did?

I may be considered a lightweight for the following statement, but Whitney Houston had it right! We are limited in so many ways because we don’t know and accept ourselves. We are insecure and have to prove the validity of our position, not caring about who we damage. Sorry Jesus, and Whitney, we haven’t learned the “Greatest Love of All.”

*Note – PrayThroughHistory uses the timeline located for several years at the Minnesota Historical Society Web site, at this URL: mnhs.org/about/dipity_timeline.htm .  The current URL is http://www.dipity.com/Minnesota/History/Minnesota-History/ and only works if typed, not pasted, in browser. It is worth the effort!

The “Virginia” is the first steamboat to reach Fort Snelling. Needed supplies are missing from the cargo, though the boat does carry the umbrella-wielding Italian count Giacomo Beltrami.*

Today’s meditation is on the relevance of the arrival of steamboats in the state of Minnesota. For the author, the practical is spiritual, and often the super-normal is the basis of the super-natural. Therefore, if I want to hear what my Good Father is saying to me today, I may have to slow my thoughts to the speed of a paddle-wheeler headed upstream. That said, below is a succinct general history to amplify this event:

“As early as the 17th Century a handful of explorers, hardy French voyageurs, and missionaries had ventured into the environs of the Upper Mississippi River Valley. Through a variety of relationships that included cooperation, intermingling, and competition with the native inhabitants of the region, several temporary encampments and forts had been established to support the lucrative fur trade. But most historians agree that nothing changed the frontier as quickly as steam transportation.

In April, 1823 the small steam packet Virginia backed out into the channel of the Mississippi from the St. Louis levee to become the first boat to ascend the Father of Waters into what would later become the Minnesota Territory. This remarkable journey was chronicled by Giacomo Constantine Beltrami, the Italian explorer who went on to play an important role in Minnesota history.  A Kentucky family en route to the lead mines of southern Wisconsin on board the 118-foot vessel represented the first trickle of what would soon become a deluge of immigration. Also on board the Virginia for this historic trip was Captain William Clark of the famed Lewis and Clark Expedition of 1805.

Imagine the contrast of traveling in the relative ease and comfort of this sturdy little boat given his experience of just a few years earlier.” **

There is much here to ponder: the new technology of the steamboat, how this technology changed history, and what timeless truths can we grasp from it? Lord of Mighty Rivers hear my simple thoughts and prayers.

Strong Creator, thank You for the scientific properties of water. It’s truly amazing! It’s like Your character, it can appear as ice, liquid, or steam, yet it is always the same substance. You put it into Your creative children to harness this transitional power for the betterment of humankind. Which of their ancestors would imagine that one day their boiling tea kettle would power massive loads upstream against the might of the Mississippi?

Here is my first confession and petition. Lord forgive our lack of imagination, both for ourselves, and for the dreams of others. May we practice to spur this generation to dream, and to the enjoyable discipline necessary to their fulfillment. May we be a voice of encouragement that pushes others to defy the current! Thank You for the symbolic value of the lonely Virginia moving slowly to its destination!

Next, new technology often makes the impossible possible, and the impractical practical. Again, who in the 18th century would think that their steaming iron maple syrup pot could actually become a boiler? And that that boiler would have the power to move unthinkable payloads up and downstream? And that those payloads would enable trade and previously unimaginable lifestyle for the average American?

We, in the 21st century, have the luxury to throw away old socks and t-shirts. Cotton products have become so accessible they are practically disposable. We do not know or remember that our ancestors may have experienced the incredible comfort of cotton articles from the South for the first time because of this steamboat’s success. Conversely, those in the South were likely amazed at the beautiful white flour Minnesota could send them so affordably.

Lord, we don’t often pause to remember what it’s like to do without. We do not see the masterful design of a plain white cotton t-shirt, or ponder that in past generations, it was a garment fit for a king. Or that the greatest chefs of Paris were astounded at the silky wheat flour from some unknown place called Minnesota. It was “Incroyable”!

Incredible Dreamer, thanks that You are not offended by our inventions! Thanks that this steamboat enabled Beltrami to better share his discoveries with a much wider audience. Ultimately, thanks that You take pleasure in our discoveries! May this river valley yield new discoveries and discoverers who make the impossible possible! (Just like You!)

Virginian Lawrence Taliaferro (pronounced “Tolliver”) becomes the Indian agent at Fort Snelling. Respected by the Indians for never making promises he could not keep, he works hard for 20 years to rid the fur trade of whisky and cheating. At last, in poor health and tired of the government’s broken promises, he resigns.*

Lord, thank you for honest people! What pleasure it is to have someone return our phone, admit a mistake in our favor at the cash register, or actually put a lost item into the “lost and found” so we can reclaim it. As King Solomon wrote so many years ago, “An honest answer is like a kiss on the lips.” I simply wish to honor and remember the “honest people” of the world to You today, and commend to You their example.

Father of Honesty, Mother of Truth, today I wish to honor  and remember Lawrence Taliaferro, who crystallizes this type of character. Thank you that he wanted a square deal for Indians of Minnesota who came to him at Fort Snelling. There is such power in a person who is willing to let their yes mean “Yes”, and their no mean “No”.

We are no different than Lawrence. There are many times that we tire of doing good and quit. Often, there is more punishment and criticism for doing the right thing than sweeping the wrong thing under the rug!? Will You forgive our hearts to quit doing right and forgive Mr. Taliaferro!? Will you forgive any assessments he made, probably quite logically, of the Federal government’s failure to honor its promises? Will You bless these specific tribes of Indians in the specific areas that they have been wronged? Will You forgive any tribal counter-judgments or resentments of State or Federal government? Will You begin to heal these centuries-old heartaches today?

Colonel Henry Leavenworth and the Fifth Infantry arrive in Mendota to build what will become Fort Snelling at the confluence of the Mississippi and Minnesota rivers.*

Spirit, thank you that You have chosen to live in us! “But you are a shield around me, O Lord; you bestow glory on me and lift up my head.” Psalm 3:3 You are our true fortress. Forgive my attempts at self-protection, or building monuments to my own honor!

Father, we make so many choices as Your people, Your Minnesotans, to act out of a heart of fear and self-protection. We’re just like Leavenworth in that we want to see what’s coming around the bend in the river…first! (Except now we have surveillance that reaches around the corner, far above us, and around the world?!)

Granted, some self-protection is just: houses to protect us from the weather, fences to mark our property, the establishment borders for our counties, states, nations, we don’t talk to strangers, etc. You know the heart of Leavenworth, the 5th Infantry,  the government, or any unspoken parties in this. Will You have mercy on any unjust fears and self-protection resulting from this event? Will You show us how to preserve both security and privacy in Minnesota?