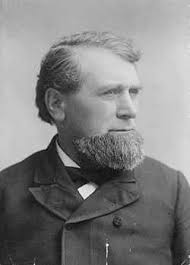 “Norwegian immigrant Knute Nelson becomes the state’s 12th governor in 1893, the first Scandinavian to hold the office. A fighter for farmers’ interests against the railroads and grain merchants, he resigned in 1895 to run successfully for the United States Senate, where he remained until 1923.” *

Thank You for the life of Knute Nelson and his leadership in Minnesota. He became a prominent leader roughly 25 years after becoming a citizen. Negative attitudes about Scandinavians were tempered by his success.

Looking back at his career, the area of greatest contention were probably those issues concerning railroad interests. On one hand, the rails offered new markets to farmers and also supplied them with manufactured goods from the east. This relationship fueled western land development, and modernized communities along the way.

However, like all new technology, railroads were often the vehicle of economic bondage for immigrant settlers, and greedy for Native Americans’ land. Farmers became dependent on the rails to bring grain to market, but having a product with limited shelf life, were subject to the manipulations of the market and shipping costs charged by the railroad companies.

But how did the railways effect the Native Minnesotans? It is understandable that a sitting Governor wants to further the economic growth and standard of living in his state, but at what cost? These questions point to his writing of the Act cited below:

“The Nelson Act of 1889 was a United States federal law intended to relocate all the Anishinaabe people in Minnesota to the White Earth Indian Reservation in the western part of the state, and to expropriate the vacated reservations for sale to European Americans. [1]

Approved by Congress on January 14, 1889, the Nelson Act was the equivalent for reservations in Minnesota to the Dawes Act of 1887, which had mandated allotting communal Indian lands to individual households in the Indian Territory, and selling the surplus. The goal of the Nelson Act was to consolidate Native Americans within the state of Minnesota on a western reservation, and, secondly, to encourage allotment of communal lands to individual households in order to encourage subsistence farming and assimilation. It reflected continuing tensions between whites and American Indians in the state. Especially after the Dakota Conflict of 1862, many Minnesota white residents were eager to consolidate the reservations, reduce the amount of land controlled by Indians and make the surplus available for sale and settlement by European Americans.

Minnesota congressmen Knute Nelson pushed for the allotment of Ojibway lands in Northern Minnesota and sale of “surplus” to non-Natives. He and others intended to force the Ojibway to relinquish most of their reservation lands. The intention was to relocate the peoples to the westernmost White Earth Reservation. All would receive individual allotments, with the remainder to be available for sale to European Americans. These actions were illegal and violated the treaties which the US had made with the tribes, but the government proceeded anyway. The Red Lake Band of the Ojibway were able to keep the southern portion of their Reservation.”**

Father, this story brings to mind the desire of King Ahab for his neighbor’s vineyard.

1 Some time later there was an incident involving a vineyard belonging to Naboth the Jezreelite. The vineyard was in Jezreel, close to the palace of Ahab king of Samaria. 2 Ahab said to Naboth, “Let me have your vineyard to use for a vegetable garden, since it is close to my palace. In exchange I will give you a better vineyard or, if you prefer, I will pay you whatever it is worth.”

3 But Naboth replied, “The Lord forbid that I should give you the inheritance of my ancestors.”

4 So Ahab went home, sullen and angry because Naboth the Jezreelite had said, “I will not give you the inheritance of my ancestors.” He lay on his bed sulking and refused to eat.

5 His wife Jezebel came in and asked him, “Why are you so sullen? Why won’t you eat?”

6 He answered her, “Because I said to Naboth the Jezreelite, ‘Sell me your vineyard; or if you prefer, I will give you another vineyard in its place.’ But he said, ‘I will not give you my vineyard.’”

7 Jezebel his wife said, “Is this how you act as king over Israel? Get up and eat! Cheer up. I’ll get you the vineyard of Naboth the Jezreelite.”

8 So she wrote letters in Ahab’s name, placed his seal on them, and sent them to the elders and nobles who lived in Naboth’s city with him. 9 In those letters she wrote:

“Proclaim a day of fasting and seat Naboth in a prominent place among the people. 10 But seat two scoundrels opposite him and have them bring charges that he has cursed both God and the king. Then take him out and stone him to death.”

11 So the elders and nobles who lived in Naboth’s city did as Jezebel directed in the letters she had written to them. 12 They proclaimed a fast and seated Naboth in a prominent place among the people. 13 Then two scoundrels came and sat opposite him and brought charges against Naboth before the people, saying, “Naboth has cursed both God and the king.” So they took him outside the city and stoned him to death. 14 Then they sent word to Jezebel: “Naboth has been stoned to death.”

These verses tell of an authority figure who is complicit in the annexation of his neighbor’s land. The part that stands out to me are the words of verse 3; “The Lord forbid that I should give you the inheritance of my ancestors.” Naboth did not want to sell away an inheritance.

Lord, there are many nuances that I do not know about this Act. I don’t know the Governor’s heart, his motivations, or the pressures on him. I simply see an action that is typically the breeding ground of bitterness and contention.

Will You forgive the injustice of this Act towards Native Minnesotans, their inheritance, property, and generations’? Will you release them from any binding counter-judgments that may hold them captive from receiving an inheritance from You? Will You reverse any curses on the lands specifically mentioned in this Act, and restore a right relationship between all Native Minnesotans and government?

Will You teach this state to have neither a tyranny of the majority or the minority? Will You enable us to neither feel the shame of asking for the help of our state, nor shame those who have graciously helped? Will You teach us about boundaries, property, lands, and inheritance?

Will You give honor to the just actions of Knute Nelson, his heritage, and generations? Will You forgive us in our judgments of the humanity and motive conflicts within our own natures’? Will You give us internal peace, contentment, and satisfaction in our hearts so we do not want another’s possession?

**** More on property rights of the ancient Middle East. https://tifwe.org/resource/ownership-and-property-in-the-old-testament-economy/