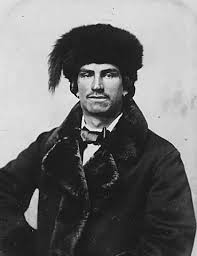 Métis families (formed by marriages between whites and Indians) take their furs from the Red River Valley to St. Paul in oxcarts. Long caravans of up to 200 carts travel from as far away as Winnipeg, Canada, making St. Paul one of the leading fur markets in the country from the 1840s to the 1860s.*

My first question, Lord, is who are the Metis people? Doing what any modern American would do when faced with something they haven’t encountered before I went straight to wikipedia, and found the following excerpt below.

“The Métis are the descendants of Indigenous Cree or Anishinaabe women who married French or Scottish fur traders during the early colonial period. They have a specific, unique culture. Most are found among the Michif-speaking peoples of the Red River region in modern Manitoba, North Dakota, and Minnesota.[1] The Red River peoples are part of the same ethnic group as many of the Canadian Métis peoples. There is also a broader but limited use of the term to describe any people who descend from the united culture created by the intermarriage of various French and British fur traders and various Algonquian, Cree and other Native American groups intermarrying during the 17th, 18th and 19th centuries. This use would exclude from Métis people-hood those whose ancestries became mixed between these different ethnic groups in other settings or more recently than about 1870.” **

So now I have a place to begin my prayer; with at least an inkling of a back story of the Metis. God, I don’t really feel too prayerful tonight, but I’m willing to wait with You and see where it goes. Ok?

To begin, thank You that the Metis are Your people, and included in Your family. Thanks that You have watched over and led them for generations before their participation in the fur trade took place. Today I give your gratitude for the this era of the oxcart trail!

Next, I thank You that Metis marriages became an intersection between Scotch, Irish, French, Cree, Anishinaabe, and perhaps more nations of people! My late aunt, Ingrid Trobisch, an author and marriage counselor once told me, “Interracial marriages may be doubly difficult, but they are also doubly blessed.” I  commend  and honor these marriages that forged a new and unique culture from their culture of origin to You Good Father! Will you bless the Metis and all their future generations with the same forbearing spirit?

How interesting that, again, a people group becomes synonymous with a form of transportation: the Sami people of Finland the reindeer, the Arabs the horse, the Peruvians the llama, and the Metis the oxcart. All through history You have given us gifts and innovative thoughts that improve our lives. Thank You for these gifts. Will You bless those who rode these caravans, and continue to provide for their needs in the present and future? Will You cause us to pause as we drive I-94 west of Minneapolis, and remember who those who first blazed this road; the Metis?

Lord, I ponder what those in the future will think about us when the car is an antiquated beast. Will our interstates lead them somewhere, or will they cease to have purpose ? Will we be associated with our vehicles? In any case, I ask that You bless the future forms of transportation that may be discovered here in Minnesota, and that they would be inhabited by people who drive them to intersect with their neighbors as the Metis did.