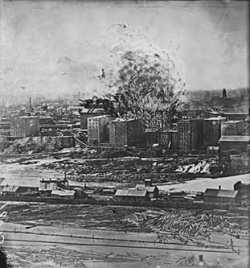 The mill explodes when flour dust in the air inside it ignites. The explosion kills 18 workers, destroys five other mills, and decimates the surrounding area. Debris lands in Saint Paul, and the shock is felt in Stillwater. The event brings instant notoriety to Minneapolis.

The tragic explosion leads to reforms in the milling industry. Ventilation systems and other precautionary devices will be devised in order to prevent further tragedy.*

Lord, this explosion truly impacted our state and city for decades. Will You forgive us our bitter root judgements of this event? Will You forgive any rash words and thoughts spoken by the rivals of the houses of Pillsbury and Washburn that may still be with us today? Will You cleanse the land, and the river from the bifurcations of this blast?
If the root sin of pride is an issue, (because of its largesse), will You forgive and release all the inheritors of this separation? We need You to provide our food! We welcome You to Minnesota, to the Falls of St. Anthony! Come and ‘be present at our table Lord!’

Wishing to start an utopian community, three Hutchinson brothers—Asa, Judson, and John—travel west to Minnesota. On the Crow River they help found the town of Hutchinson and commit it to the values of education, equality, and temperance. The popular Hutchinson Family Singing Troupe promotes these same principles as they tour.

Abby, John, Judson, and Asa—4 of the 13 brothers and sisters—are the Hutchinson Family Singers. Called “the best known troupe of family singers in the country,” the Hutchinsons sing and compose songs about American life that often carry a social message.*

Lord, thanks for the memories of this family. Thank you for their persistence in using their gift of song and entertainment for good, rather than their own fame. May You release many of this generation to be so moved and committed to You! Thank you for the good You do for us through both the enjoyment of making and listening to music!

Father, forgive the judgments we’ve made towards each other on the basis of position towards alcohol. Especially during this era of temperance, Minnesotans who drink have judged non-drinkers, and vice versa. Will You forgive our disrespect of the positions of others and their cultures of origin? For example, the Germans of southern Minnesota had no conflict or fear of drinking beer. Many agreed with Martin Luther’s famous quote that “beer is proof that God loves us and wants us to be happy.” Will You give us the power to not use alcohol abusively in this generation, but to savor it properly? Will You give us faith that You are our brother’s keeper, so we don’t have to jerk his chains?

Will You release us from the bitter roots of alcoholism, and the effect it has had on the individuals, families, cities, counties, tribes, and nations that make up our state? Will You release from any residue of the self-righteous judgments of those who led the temperance movement from a heart of legalism and pride over real love for their neighbors? Sometimes we do good with a bad heart. Will You give us humility to deal with the sensitive spots in the conscience of our fellow man according to Your merciful example?

“A bruised reed he will not break, and a smoldering wick he will not snuff out. In faithfulness he will bring forth justice;” Isaiah 42:3

*Note – PrayThroughHistory uses the timeline located for several years at the Minnesota Historical Society Web site, at this URL: mnhs.org/about/dipity_timeline.htm .

In August the commissioners begin negotiations with the Lower Bands at Mendota. The Mdewakanton and Wahpekute are pressured into agreeing to terms similar to those forced on the Upper Bands, including $220,000 in upfront cash to the fur traders. Both treaties promise the Dakota new reservations along the Minnesota River “in perpetuity,” a pledge that will not be kept.*

Lord, forgive our desire to ‘work the system’! I am angered by the deception of the Upper and Lower Dakota Bands at the hands of Luke Lea, and Alexander Ramsey through the trustful signing of the “Trader’ Papers”!!! Lord, we as a state and nation inherit their false judgments and guilt! Forgive this tragic separation of the U.S. government, the Upper and Lower Dakota Bands, and all other Minnesotans!!

*Note – PrayThroughHistory uses the timeline located for several years at the Minnesota Historical Society Web site, at this URL: mnhs.org/about/dipity_timeline.htm . 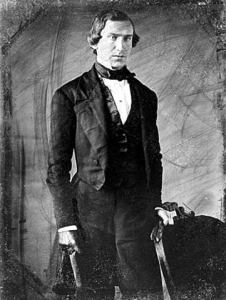 The territorial legislature convenes and, as one of its first acts, establishes the Minnesota Historical Society.
“Write your history as you go along, and you will confer a favor upon the future inhabitants of Minnesota, for which they will be ever grateful.” ~The Rev. Edward D. Neill at one of the Society’s first meetings.*

Jesus, I wonder if Rev. Neill had an inkling of the gravity of what he was saying? We often do not know which words of ours will impact another. Yet I agree so strongly with him that we have been shown favor!

Why do You allow us to access Your nature of being present at all times to participate in Your work of healing Minnesota? You are so different from every object of worship and our human style of leadership! Even our best leaders can act out of pride; and the greatest out of a need for recognition.

Lord, will You acknowledge the present leaders of Minnesota so that they do not need the accolades of men? Lord, will You forgive all leaders past of seeking the approval of people rather than Your pleasure? And by this I don’t mean merely political leaders, chiefs of tribes, captains of industry, or spiritual leaders! I mean ALL who have had influence.

To the future generations of Minnesotans, “Speak and act as those who are going to be judged by the law that gives freedom, because judgment without mercy will be shown anyone who has not been merciful. Mercy triumphs over judgment!” James 2:12,13

A treaty with the U.S. government moves the Winnebago (Ho-Chunk) from northeastern Iowa and southeastern Minnesota to a reservation in Todd County. With the Ojibwe to the north and the Dakota to the south, government officials hope the Winnebago reservation will serve as a buffer zone between Minnesota’s two larger Indian nations.

The Winnebago prefer the terrain of the prairie to this wooded area, and in 1855, they relocate to a smaller tract of land in Blue Earth County. They remain there until after the U.S.-Dakota Conflict, when the government forces them to move with the Dakota to the Crow Creek reservation in South Dakota.*

Jesus, thanks for the peoples of Minnesota. Thanks that You made us Your people whether of Winebago, Ojibwe, Dakota, English, German, French, or Swedish descent. It’s wonderful that we are uniquely made, distinct families conveying some reflection of Your light!
Will You illuminate and forgive the bitter root judgments of the US government towards the Winnebago and vice versa? Will You forgive the government’s desire to use this people as a “buffer” between Ojibwe and Dakota, and the implications that they needed help maintaining peace between their peoples? Will You fill hearts and lands with the gift of restoration here in Minnesota, South Dakota, Iowa, and replace the curses from the hearts of all parties in this event?

Six students attend the opening of the Lake Harriet Mission School for the Dakota, founded by the Reverend Jedediah D. Stevens. An early example of education within the boundaries of present-day Minnesota, the school was sponsored by the Presbyterian Missions Board and taught by the founder’s niece, Lucy C. Stevens, in a cabin built by Gideon H. and Samuel W. Pond.*

Good Teacher, thank you for the benefits of the Lake Harriet Mission School for the Dakota. Thank you for the heart of providing education to all! It’s so good to share what we know and have it received.

It is not easy to be the first. It takes boldness to reach out across cultural lines. On one side of this picture we have Dakota students who are reaching out to Stevens. Conversely, he is stepping out of his comfort zone to meet and teach members of an unfamiliar culture. Will You bless both sides of this exchange? Will You remember their boldness and trust to know each other? Each group is an exploratory party of sorts. May we never forget what its like to be an alien!

Lord, I also want to acknowledge our separations that may begin as academic pride. We assume our knowledge will change our ‘underprivileged’. We often fail to pass on wisdom (good judgment), and even foster an academic culture that hesitates to recognize the merits of wisdom. As moderns, we cringe at even the word ‘judgement’, although one could argue that good judgment is the root of justice?!

I feel prompted to acknowledge the potential judgments of Stevens and Williamson against the Pond brothers, and perhaps a spirit of competitiveness. Lord, will you forgive any heritage of academic  or religious pride stemming from  them forward to us if this is the case? Will you forgive the stinging pain of criticism towards or counter-judgments from the Ponds, the Dakotas, these first six students, or any other pertinent unaddressed party? Will You free the land  of Minnesota from these judgments, and bring the blessing of humility that we all have betrayed You, Your peoples, and our selves? Will You make us humble teachers and students of the “knowledge” You have revealed to us? Amen.

*The current URL is www.dipity.com/Minnesota/History/Minnesota-History/ and only works if typed, not pasted, in browser. It is worth the effort!